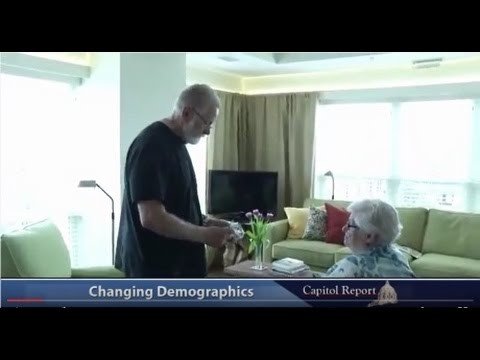 Senate Media Services’ “Capitol Report” program returns to PBS stations this weekend. The program has been in hiatus for two years following the closing of the State Capitol studio. Thanks to the Minnesota Public Television Association (MPTA) stations, the program is broadcast on several PBS channels throughout Minnesota. A link to the list of broadcast stations and times is below.

On this week’s program, “Capitol Report” moderator Shannon Loehrke delves into the changing state demographics in the first of a two-part series. Minnesota’s population is becoming more ethnically diverse, and the percentage of residents nearing retirement is growing.

Shannon talks with State Demographer Susan Brower about the potential impact of the demographic changes on state policymaking. Department of Human Services Commissioner Emily Johnson Piper explains what her agency is doing to address the growing health care demands resulting from an aging population. Sen. Jeff Hayden, DFL-Minneapolis, features the work of the Minnesota Legislature during the 2016 session to help curb the economic disparities experienced by some cultural groups. Finally, Sen. Bill Weber, R-Luverne, who represents an increasingly diverse rural district, explains some of the community efforts underway to accommodate the trends.

View the program online on the Senate Media Services’ web page at http://www.senate.mn/media or YouTube page at https://youtu.be/E_Rbg2LmGsc.

Visit http://www.senate.mn/media/media_coming_up.php?ls for a list of broadcast times and stations.