LOG OUT
MY ACCOUNT
LOGIN
Home
/
MSBA Advocate
/
Advocate for education by reaching out to new members of Congress
by Jerry Jensen
Posted on November 9, 2016April 5, 2021
Posted in MSBA Advocate

Millions of Americans voted on Tuesday, not only for the 45th president of the United States, but also to elect members of Congress. While the race for president has occupied much of the country’s attention, congressional members stand to significantly influence education policy and work with President Trump’s Administration to set an education policy agenda.

Yesterday, Americans voted to fill 435 seats in the U.S. House of Representatives and 34 seats in the Senate. NSBA Federal Advocacy and Public Policy staff compiled election results in the attached charts for Members of Congress on the Education Committees and the education-related Appropriations Subcommittees in both the House and Senate. While there may be changes from the current committee composition, the attached charts should be used as a resource to estimate and assess potential membership of education-related committees in the 115th Congress.

Remember: The most important member of Congress is YOURS, and it is never too early to engage with members-elect — even before they are sworn in. Reach out and introduce yourself; make sure members of Congress know who you are and know that you are the voice for thousands of school board members in your state. NSBA’s Advocacy Agenda identifies critical issues for Congress to address when they return on November 14 — and again when the 115th Congress is seated on January 4, 2017. Get involved now!

Federal Advocacy staff will continue to keep you updated so you are ready for the 115th Congress and the 2017 Advocacy Institute. 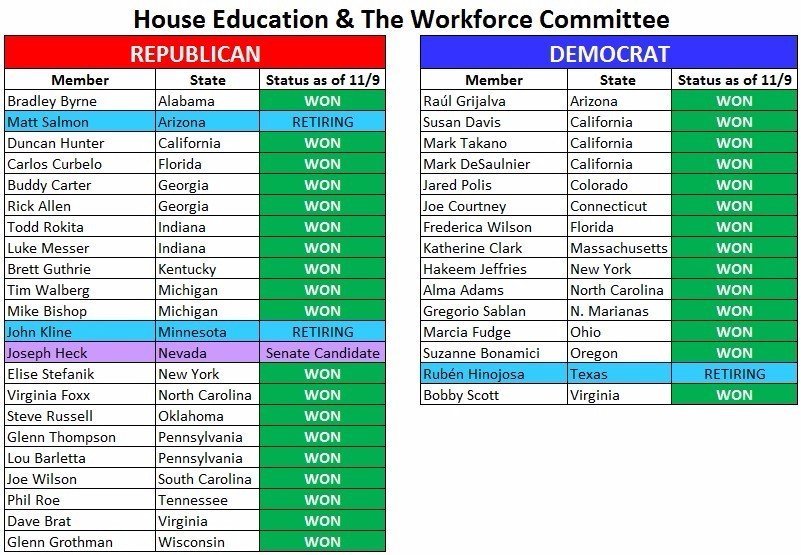