Spring is in the air and everyone is down to business at the Capitol. Here is a snapshot from the first week of the legislative session that officially started at noon on Tuesday.

Every Child Succeeds Act and the World’s Best Workforce

Brenda Cassellius, education commissioner at the Minnesota Department of Education (MDE) provided the House Education Innovation Policy Committee with information on World’s Best Workforce (WBWF) and Every Student Succeeds Act (ESSA) Thursday morning. The recent passage of ESSA preserves some of the goals and priorities of No Child Left Behind (NCLB), as well as providing states with more authority and flexibility in many areas, but still holds schools accountable for results. 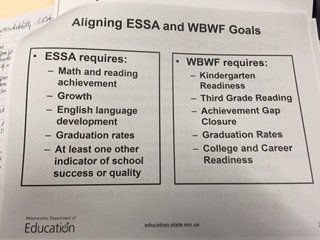 Cassellius sees ESSA and WBWF goals aligning well and is optimistic not much would need to change, but is seeking input from stakeholders. As school board members, your opinions are key to this process. MDE will hold several ESSA topic listening sessions through April and May. This is a great opportunity to provide input on the various ESSA issues. Please see the schedule below and mark your calendars now. We will continue to provide information. 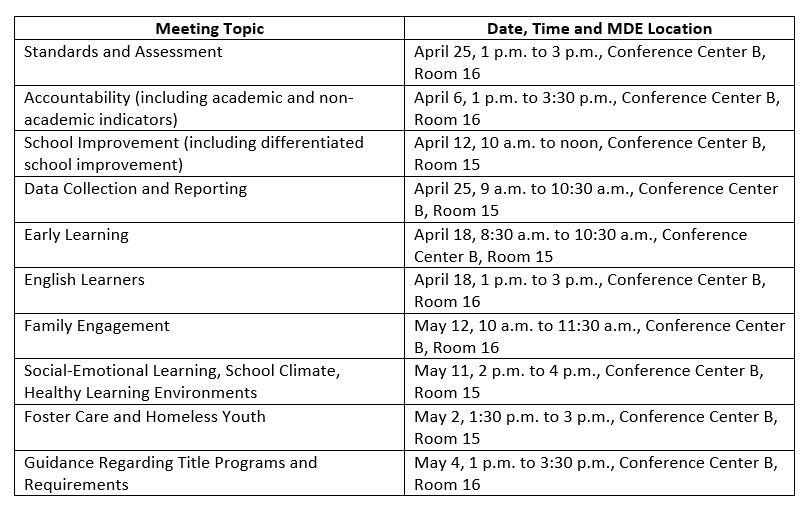 The MDE office is located at 1500 Highway 36 West in Roseville. Visit https://education.state.mn.us/MDE/Welcome/Direc for directions.

The 2015 MSBA Delegate Assembly supported the resolution brought forth by Farmington Area School Board in December.

The Senate Rules and Administration Subcommittee on Elections met Thursday afternoon where Sen. Katie Sieben introduced SF 2393 to fix the law passed in 2015 requiring a school board to hold a special election to fill a vacancy if more than one year remains in the unexpired term. 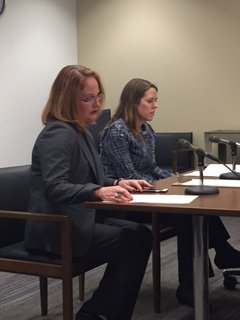 MSBA Director of Government Relations Grace Keliher worked with Sieben to understand the unintended consequences of the current law. “There are many administrative complexities and costs associated with holding a special election,” Keliher said. “Rural districts tend to have very low-voter turnout, sometimes just a handful of people.” 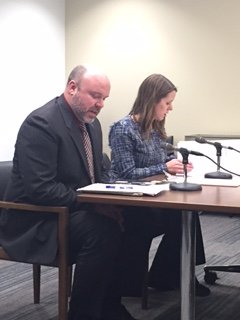 Milaca Superintendent Tim Truebenbach testified in favor of Sen. Katie Sieben’s bill (SF 2393) that would fix the law passed in 2015 requiring a school board to hold a special election to fill a vacancy if more than one year remains in the unexpired term.

Two superintendents testified at the hearing on Thursday hoping lawmakers would understand the burden of the current law. Milaca Superintendent Tim Truebenbach told the committee there are 6,500 eligible voters in his district. The special election they were required to hold cost the district more than $10,000 and only 227 votes were cast. 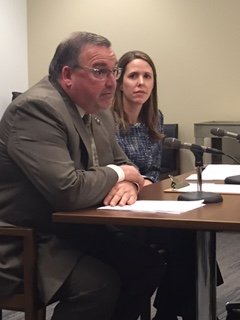 Elk River Area Superintendent Mark Bezek said that his school district will be operating seven months with only six school board members. The district spent $30,000 in the last special election.

Sen. Jim Carlson offered an amendment to the bill where the board could appoint a member immediately — however, the seat must be on the ballot in the next general election. The amendment passed and the bill, as amended, will now be held over for possible inclusion in an omnibus bill. This was a first step in righting this problem.

Officials from the Office of the Legislative Auditor presented findings and recommendations from their report on the Minnesota teacher licensure system Thursday to the Senate Education Committee.

“There is a good deal that needs to be fixed,” said Legislative Auditor James Nobles. “The system is broken … and state laws need a major overhaul.”

Deputy Legislative Auditor Judy Randall said licenure laws are complex and there are problems with implementation. Randall cited three key recommendations to the Legislature to remedy the licensure system:

1. Clarify licensure statutes: Randall said there way too many differing terms with “license,” “teaching license” and “standard licensure” in law — along with two types of “restricted licenses.”

3. Consolidate licensure system under one organization: “The lines of responsibility are blurred and the current governance structure is not working,” Randall said. She said one statute said the Minnesota Board of Teaching “must issue licenses” — but another statute says licenses “must be issued by the Minnesota Department of Education.” Randall would recommended the process by overseen solely by the Board of Teaching.

Randall also noted there are two sets of licensing standards — one for Minnesota-trained candidates and another for candidates trained and licensed elsewhere. “Candidates should be treated equally as possible, no matter where they are from,” Randall said.

Committee chair Sen. Chuck Wiger gave the auditors an “A-plus” for its report and said he was pleased that the report focused on finding solutions rather than just finger-pointing.

The committee also discussed and laid over three bills for possible inclusion in the omnibus education bill:

SF 2434 (sponsored by Sen. Kevin Dahle) would clarify licensing for teachers trained in other states.

“We need a restructuring,” Dahle said. “This bill would address the use of inconsistent terminology, remove outdated language and provide clarity.”

Also, Clausen said he would like to together task force to study the auditor report.

SF 2291 (Sen. Gary Dahms) would modify school district reporting requirements. Sleepy Eye Superintendent John Cselovszki and Springfield Superintendent Keith Kottke both testified in support of Dahms’s bill. Kottke said there are too many mandated reports and that the reports take time away from working with students.

MSBA’s Grace Keliher also testified and told the committee that school districts are over burdened by paperwork. “We need to step back and look at what we are asking our school districts to do,” she said.

Visit https://www.mnmsba.org/Advocacy for House and Senate bills of interest.