The first deadline of this 2016 legislative session was last Friday. All policy bills needed to have a hearing in their house of origin in order to be considered for advancement. With the policy bills completed, we now move toward the finance bill deadline — and the attention has definitely shifted.

This shift was obvious in the Senate Finance Committee E-12 Budget Division where we heard a number of education finance bills first thing Tuesday morning. Sen. Alice Johnson’s bill regarding full-service community schools was first item on the agenda. Sen. Johnson’s bill (SF 2813) would appropriate $5 million to build on this existing pilot program. The schools bring resources into one location and collaborate to ensure the needs of the whole child and the family are being met. Currently four of the 12 schools using this program are being funded. The other eight schools that applied for full-service community status are “ready to go,” according to Sen. Johnson. Testifiers shared successes of their full-service community schools and the need for them, since children are not responsible for the conditions they live with. 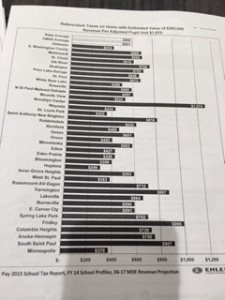 There seemed to be a continued theme of equity as Chair Chuck Wiger introduced SF 2394, an increase of referendum equalization revenue bill. Sen. Wiger stated how “funds for education should not be based on ZIP code” and that 180 school districts would benefit. Several superintendents testified (and school board members stood in support) about the inequities of funding our schools using property taxes. A recent letter to the editor in the Star Tribune cited that five of the six largest school districts in the metro, and others across the metro, are negatively impacted under the current funding system. “All kids deserve equity in education,” the letter stated.

One of MSBA’s legislative priorities this session was to add funding to the general education formula. Sen. John Hoffman introduced MSBA’s bill (SF 2318) that would add an additional 1 percent increase to the per-pupil formula. Sen. Hoffman urged legislators to finish what they started in 2015 by adding revenue to the formula, which would make an impact on every single child in the state. He looked at those seated with him and stated how much support the bill had with every major association — administrators, school boards and the teachers union. 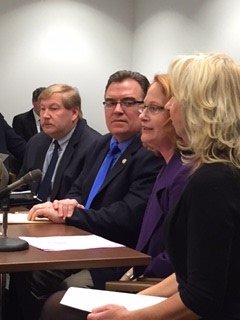 MSBA’s Grace Keliher (second from right) testified Tuesday on SF 2318, a bill authored by Sen. John Hoffman (seated next to Keliher) that would add a 1 percent increase to the state’s basic education funding formula.

Last week, MSBA highlighted a bill that established a continuing education program for those educators teaching concurrent enrollment classes without the requisite credits. Sen. Kent Eken’s companion bill (SF 3062) was heard Tuesday. The bill would provide $3 million to fund course development and provide stipends and scholarships for those educators participating. Jeremy Kovash, executive director of the Lakes Country Service Cooperative, said the bill would help some 300 educators who are teaching more than 4,000 students/courses and saving families approximately $2.4 million in college tuition through postsecondary enrollment options. 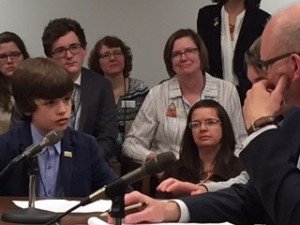 Once again, dyslexia has caught the attention of lawmakers at the Capitol. On Tuesday, a group held a rally and had several testifiers on behalf of Sen. Roger Chamberlain’s bill (SF 2308). According to Decoding Dyslexia, one in five students have dyslexia. The bill suggests placing a dyslexia specialist at the Minnesota Department of Education’s regional centers of excellence to provide technical assistance and serve as the primary source of information for schools addressing the needs of students with dyslexia. MDE and the regional centers would work to help school boards, and others, implement World’s Best Workforce goals for those impacted students.