The basement hearing room was full of testifiers, news media and cameras for Tuesday afternoon’s House Education Finance Committee meeting. The meeting started full speed with Chair Jenifer Loon’s bill (HF 3679) requiring that teachers receive a report or publication about students placed in their classrooms who have a history of violent behavior. Also, the bill would give teachers the ultimate authority to manage student behavior. In light of a recent situation that has made the news, Rep. Loon presented an amendment offering “whistleblower” protection for teachers.

A number of educators testified about their own personal experiences and of those close to them. Behavior is moving from the parking lots to the hallways to the classroom, said one testifier, who was a licensed teacher for many years and had to undergo three major surgeries after one incident.

Many of the committee members had comments and questions. Some members thought the proposed student discipline work group was a better avenue and some urged a more in-depth look at counseling services in the schools. Without a target, Rep. Loon said it was difficult to put a dollar figure on the appropriation.

MSBA RESPONDS: There is no doubt this is a serious subject. However, there are several questions that should be addressed surrounding data privacy — i.e., who has access to information, the portability of information and how long information is valid. There is also a question of who is ultimately responsible for the classroom and management of a building. MSBA believes the proposed student discipline work group can address all of these issues. MSBA will continue to monitor this issue.

Grace Keliher, MSBA’s Director of Government Relations, testified on two bills during Tuesday’s meeting. Rep. Linda Slocum’s bill (HF 3500) seeks to reduce special education paperwork by 25 percent in hopes of easing the burden on special education teachers. Education Minnesota officials shared results of a recent survey where half of their members said they were torn between caseload and workload, with 94 percent saying their workload impacted their caseloads.

MSBA RESPONDS: If a reduction in unnecessary or duplicative work can provide teachers more time with a student or advancing a student, it should be examined carefully and implemented where at all possible. 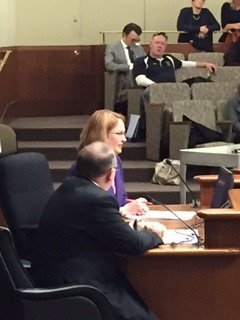 A bill to make changes to the process school districts and service cooperatives use to receive proposals for group health insurance coverage was introduced by Rep. Ron Kresha. HF 3129 seeks to remove the requirement school districts have to get one proposal from the Public Employees Insurance Program (PEIP). Ron Kresha’s reasoning: we don’t single out another provider or carrier — there is a need to keep it on an even-playing field. “Either name all vendors or don’t name one,” Rep. Kresha said. He continued to explain the bill, stating school districts should be able to enter into contracts up to five years in length. The bill would still require sealed bids to be opened by district officials and elected representatives.

MSBA RESPONDS: The option of entering contracts up to five years in length provides districts the flexibility to do what is in their best interest. A two-year renewal cycle requires school district management to be in the continual process of gathering, negotiating and implementing bids. Requiring a bid from a specific vendor (such as PEIP) is yet another mandate. A school district should be able to choose the best options for that district. We remain committed to a system that is transparent and balanced.