The Minnesota House of Representatives is taking steps to repeal a complex and costly school board vacancy law passed last year. The new version of the bill (HF 3123) would revert the appointment process back to the way it was, except when a school board votes off a member of the board to create a vacancy.

Today, the House Government Operations and Elections Policy Committee approved the bill with one amendment — after an appointment by the board, the public has 30 days to gather a petition of at least 5 percent of the total number of voters from the most recent state election. If the petition is valid and filed, the appointment would be ineffective and a new appointee must be named.

The amendment was authored by committee chair Rep. Jeff Howe. Though MSBA would rather not have another complicated step in the vacancy process, this bill is still better than current law and much better than the Senate version. 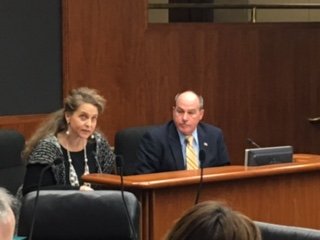 Gibbon-Fairfax-Winthrop superintendent Tami Martin (left) testified Tuesday in favor of Rep. Jeff Howe’s bill that would modify the timeline for special school board elections to fill a vacancy.

“Knowing that every penny we spent meant less funding for our students, we tried every way we could to control costs, but we still had to rely heavily on the assistance of the county and they had to recoup their expenses,” Martin said. “At the conclusion of the election we ended up with a total of 34 votes. The cost for printing, county services, election judges, and district employee time totaled $12,166.73. That equates to $357.85 per vote.”

MSBA REPONDS: MSBA is in support of HF 3123 because it would minimize the number of costly and inefficient special elections for school districts. This amended bill will most likely be included in the House Government Operations and Elections Omnibus Bill.