MSBA honored two legislators this week for their outstanding contributions to public education in the 2015 legislative session. 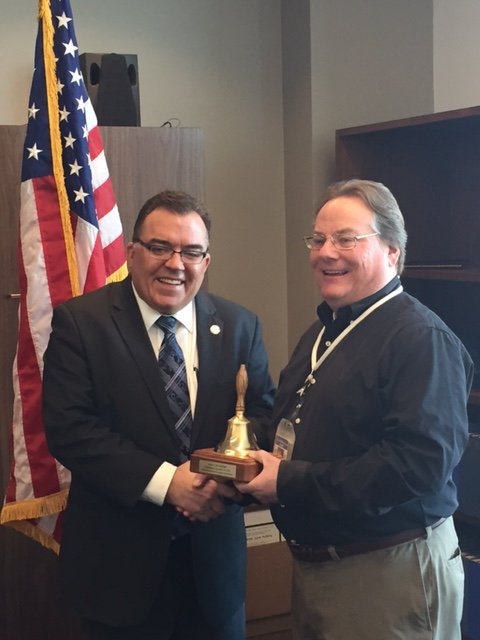 Sen. John Hoffman (left) receives one of MSBA’s “Legislator of the Year” awards from Anoka-Hennepin School Board Chairman Tom Heidemann.

Senator John Hoffman (DFL-Champlin) and Representative Mark Uglem (R- Champlin) were both presented with MSBA’s “Legislator of the Year” award.

Hoffman and Uglem were both recognized for their work at the Capitol on behalf of Minnesota’s public school students and for ensuring local school board members’ voices were heard and acted upon.

“It’s an honor and a privilege to recognize both of these Anoka-Hennepin legislators who worked diligently on behalf of the students in our district and around the state,” said Tom Heidemann, school board chair of Anoka-Hennepin.

Heidemann pointed out how education funding has not kept up with inflation. The 2007-08 economy forced their school board and boards across Minnesota to make difficult cuts and decisions. “We are still trying to recover and hope to have a portion of the current $1.2 billion surplus which will afford us the ability to decrease the student-teacher ratio we were forced into in 2009,” said Heidemann.

A core mission of MSBA’s Government Relations team is to ensure its membership is heard at the Capitol. “Anoka-Hennepin wrote a resolution urging the 2015 Legislature to increase general education formula by $300 per pupil”, said Denise Dittrich, Associate Director of Government Relations for MSBA. “We were able to take that resolution to both the Senate and the House where both of these legislators saw the need and worked in a bipartisan way to get it done.”

Dittrich went on to say how critical and valuable school board members’ voices are in creating and passing legislation.